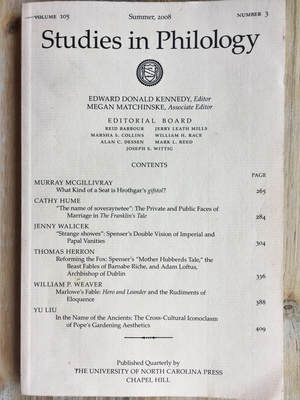 Thanks to the encouragement and mentorship of professors Janine Gerzanics (West Valley College) and Andrew Fleck (San Jose State University), this article reached the eyes of renowned  Spenser scholar Anne Lake Prescott, who generously assisted in its completion; upon her recommendation, Studies in Philology accepted the article "with enthusiasm."  Many thanks, again, to these scholars for their invaluable assistance.

​Abstract:   Visions of the Worlds Vanitie is considered one of Edmund Spenser’s minor poems, and has received little attention from scholars.  Each of its nine “story” stanzas tells of a large, vain animal plagued by a small one; the poem is usually seen as an allegorical reference to the vanities that allowed small problems to proliferate and eventually destroy the Roman Empire.  But Visions is far more than a lament about vanity, or the transitory nature of power as exemplified by the fall of Rome.  Within each of the nine allegories Spenser has hidden two separate biographies of a pre-Fall emperor and a pre-Reformation pope.

In two chronological sequences totaling eighteen accounts, Spenser draws on history, myth, symbolism, word play and anecdotes to connect each of the large animals to a Roman emperor and a Catholic pope, and each of the small animals to something (or someone) which causes the death of each emperor and the demise of the Catholic Church.   To summarize one striking example, the seventh stanza is about a wealthy elephant that parades around wearing a “gilden towre” until he is pained by “a little Ant, a silly worme”.  The emperor referenced is Trajan, who looted 150 tons of gold from Dacia (as recorded on Trajan’s Column, or tower) and took Rome to its peak of wealth.   While in Antioch sentencing his outspoken critic Ignatius (Bishop of Antioch) to death by lion, Trajan suffered a stroke from which he never recovered.  The pope referenced in this allegory is Leo X, who actually owned a pet elephant that was paraded about wearing a tower, and who was the pope when Martin Luther nailed up his 95 theses and began the Reformation.  Furthermore, Luther was condemned at the Diet of Worms.

Visions of the Worlds Vanitie is not a minor poem, as thought by scholars, but a richly layered study of powerful individuals and empires spanning fifteen hundred years:  their greatest faults, most visible leaders, and the demise of all of them.