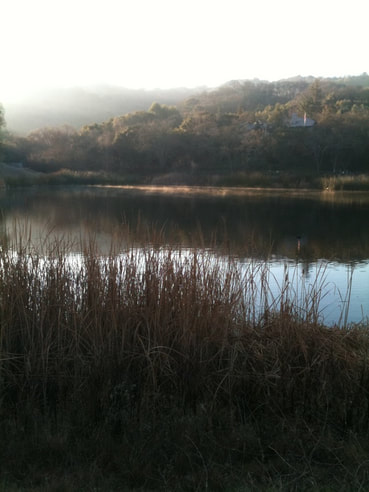 The first rainstorm sloughs the hills of dead leaves and dust, filling the dry channel below our home with a muddy rush. The creek charges another hundred yards and then under the street to spew into a secluded pond, where its boisterous entrance blurs the delta with silt.  By spring the soil has settled, and the pond’s reappearing shoreline sprouts new blades. Cattails bloom in spiky, rust-tipped stands.  Great white egrets wade at water’s edge, their long necks arced in graceful question marks.  Ducklings trip and tumble through the weeds. In long ago springs when my children were little, we would walk to this hidden idyll with bags of crumbled bread to feed the birds. Now that my own nest has emptied, I honor those memories by picking up trash at the pond, a small good deed that costs me only time. But one day early last spring, it nearly cost my life.

It’s a gusty autumn evening in the woods near my home. Loose leaves flap and flutter across the narrow path, darting and swooping before settling into silent drifts. Some sail down the current of the creek; one hangs upon the brittle web of a wiry shrub, trembling like a spider’s prey. I’m ankle-deep in death. I scuffle and crunch along, careful to avoid the burgundy legs of berry vines that sprawl and clamp across the trail. Overhead, dangling twigs tangle up my hair, and bare branches crackle the ochre sky. The air is ripe with damp earth and the roar of wind.     Read more on page 14 of The Journey . . .
Seasons
Published in Reed Magazine: A Journal of Poetry and Prose, Vol. 59, 2006 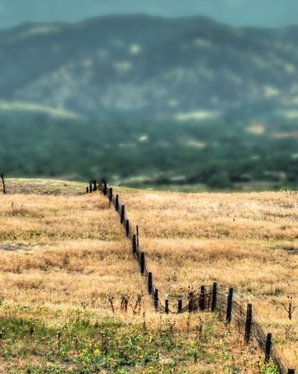 Here in the south San Jose foothills, the sharpest turn of the year is that between spring and summer.  There is an indefinite intermingling of the other seasons, a gradual adjustment in the quantities of color and water and growth, until we belatedly realize the nakedness of the buckeye or the buds bursting out on the oak.   But summer sneaks up on spring and pounces.  One morning there is a pale frothy head on the long green grasses, and the next their soft waves have become a brittle, stabbing mélange of thistles and foxtails.

With equal abruptness, my dying father has become a frail, parched shell of his indefatigable self.  From my home along the edge of Quicksilver County Park, just a few ridges and seventy years from the hills he roamed in the 1930s, it is easy to mark the parallel between his ruin and that of the land.  Even as I write, the golden glow of evening burns on the tips of the yellow grasses, flickering, swaying in the breeze like a candlelight vigil in a vast memento mori.   The timeless dance of death has trampled across both the meadow and my heart, and I ache with the melancholy of universal demise.

It is through the beauty and spirituality of nature that I have always connected with my father, who made sure my five siblings and I grew up mostly outdoors. He remembered fondly his boyhood exploring in the Los Gatos foothills, and described his adventures to us vividly at the dinner table, or on family hikes, or as he tucked us into bed. I still cannot pass Lexington Lake without envisioning four dusty, terrified boys dangling from the now extinct flume, nor see the town creek without hearing his whoop of joy at a just-plucked trout or a bare-skinned plunge, nor see the scattered light under a sycamore without feeling the sting of his tree-fort splinters.  His was a childhood of the outdoors, and he recreated it for us in well-told tales, mountain vacations, and the natural settings he chose for our homes.

He built our first house himself, a simple structure nestled on a shaded slope among madrone and tan oak and bay laurel in the Saratoga hills, near Los Gatos.  The air was so clear the night Neil Armstrong strode across the Sea of Tranquility that I insisted I could see him with the naked eye.  By day we dug tunnels toward China and threw rocks down into the sprawling valley, where the rising smoke of orchard pyres signaled the sacrifice of fruit trees for silicon. When the world below us was being paved for progress, and the proximity of our hillside home began attracting ardent realtors, my father moved us to an old apple farm on the Santa Cruz side of the range. There, sans television, we were blissfully happy riding horses and building forts and climbing trees.  The beach was a mile away, its sand unthreatened by the crucibles of what would soon be called Silicon Valley.   The encroachment of urbanity had been, for the time, deferred.

My father always took us real camping and fishing, tended a thriving vegetable garden, taught us about nature, and encouraged us to be resourceful and responsible.  He and my mother, another former teacher, believed children needed fresh air, whole food, good books and inspiring music – a formula I find myself struggling to follow in a society pervaded by Halo, Quarter Pounders, and Eminem.  My own childhood seems suffused with Wordsworth’s “celestial light,” a gift from my parents.

But death cannot retract that gift; in fact, it enhances it.  Even in the decay of the bleached meadow I am discovering that there are gifts that cannot be opened or appreciated until the life has left them.  The pungent fragrance of the fallen oak leaves and sunburnt weeds crackling under my feet helps me understand that there is a different quality of being in the fallen leaf, the severed stem – a new beauty in the brokenness, a new force released by the rupture. There is an elevation that follows the descent of a life, just as the setting sun clears the way for the grandeur of a star-spangled sky.  The numb nothingness in my heart clears space to remember, treasure, and share. There is a song that, to be sung, requires death.

Twilight tints the mountains lavender.  I stand just outside the split-rail fence that divides my suburban home from the untamed wilderness, the artificial from the natural, the fleeting from the eternal, the present from the past.   Before me sprawl the wooded foothills, undulating with oaks and buckeyes, where my children play.  Beyond,  in purple layers spiked with redwoods, rise the forested hills where their grandfather once played.  Down their far side, in the invisible distance, roll the orchard hills where I played as a child, and where my father now lies fading in the old white farmhouse.

Yet even as nature robs me of his existence, I know that it is through nature that I will forever detect my father’s presence.  I am sure to find him in sun-spattered, backlit woods, in the rich scent of warm plowed earth, in the brash squawk of the stellar jay, in the mineral taste of a mountain stream.  And wherever a trout ripples the dappled water, I will again be a child trudging along beside him, his big warm hand over mine.

Rod Clendenen passed away on June 16, 2003 at his farm in Watsonville, surrounded by his wife and six children.
Proudly powered by Weebly
Photo used under Creative Commons from joiseyshowaa